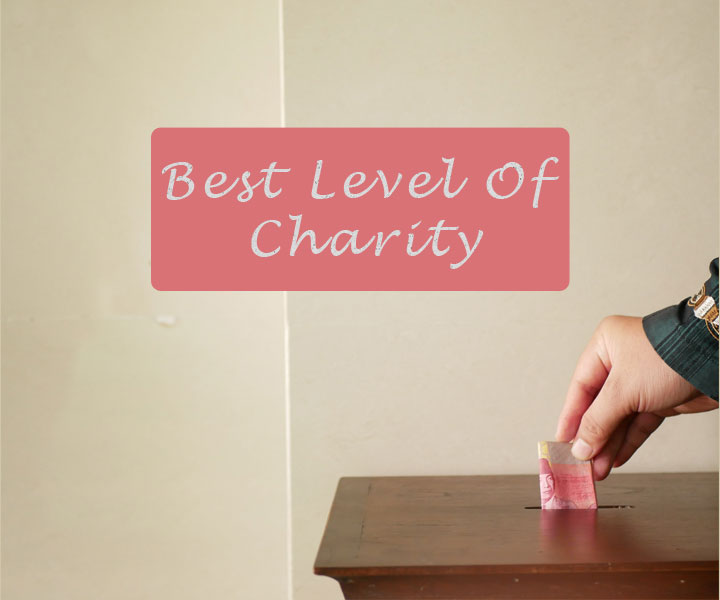 Those who invest their riches in Allah's cause and do not pursue their gifts with reminders of their kindness or loss, for them their reward is with their Lord; they will not be ashamed of them, nor will they grieve. Kind words and covering up mistakes was better than charity and accident followed.

Sadaqat means giving alms and even lawful alms to which the word zakat is being used in the Quran as well as the Prophet Muhammad's Sunnah. Zakat has been renamed sadaqat since it is a sort mandatory charity, too. It is a mandatory sadaqa whereas ordinary sadaqa is voluntary.

What is the best level of charity? Most of you would answer, it is to feed poor or to provide them with money, shelter etc. But charity is not restricted to helping the poor people only.

There are other levels of charity as well which we don’t consider and thus end up losing the opportunity. We belonging to a middle class family, struggling in tightly packed financial budgets feel like we can’t earn this reward. But if we take example from our religion, for example our Prophet Mohammad has said in the following hadith:

Narrated by Adi bin Hatim, I heard the Messenger of Allah (saws) saying,

"Save yourself from the (Hell) Fire even with half a date (to be given in charity); and if you do not find a half date, then you can give someone a good pleasant word" [Sahih Al-Bukhari Hadith 4.793].

It’s not only the money we can provide, but it’s the positive gesture, the kind words, the soft attitude towards someone.

Affordable Charity for all

We can easily afford being kind to our relatives, maids and strangers. If we can’t help someone, we can listen to their problems and help them in getting rid of the burden in their hearts. This is also indeed a charity and only God knows whose deed is the best in His eyes.

What Allah says about giving Charity?

Any who invest their riches in Allah's cause and therefore do not pursue their gifts with reminders of their kindness or loss, for them their reward is with their Lord; they will not be ashamed of them, nor will they grieve. Words of compassion and covering up mistakes are better than charity proceeded by injury. Allah says in Surah Saba, verse 39:

Say, “ Surely, my Lord extends provision for whomsoever He wills, and straitens (it) for him. And whatever thing you spend, He replaces it, and He is the best of the sustainers” [34: 39].

What are different easiest ways of doing Charity?

It doesn't take a lot of discretionary income to donate to charity. If you'd like to make the world a safer and better place, you can always help without a major check break.

Most organizations thrive through volunteer endeavors. Volunteering is a good way of contributing to the community and can be as important as donating cash.

When you have a specific talent — such as writing, cooking, or photography — consider providing pro bono services. Many hospitals, non-profits, and advocacy organizations have special needs but are unable to afford trained staff.

Many charities including non-profits, accept clothes, shoes, furniture, and vehicles, accept donated items. If you've got something to get rid of, consider donating it to a good cause instead of tossing it out.

In many ways, people can raise money for charity — by coordinating a local sale, posting your favorite campaigns on social media, or taking part in a supported walk. When you have a compassionate people network and also some hustle, a hefty donation can be made.

When you still ask your friends and loved ones for suggestions about birthdays or holiday presents, you can encourage them to donate to a local charity instead. Most charities find it easy for their company to set up a website to raise birthday donations.