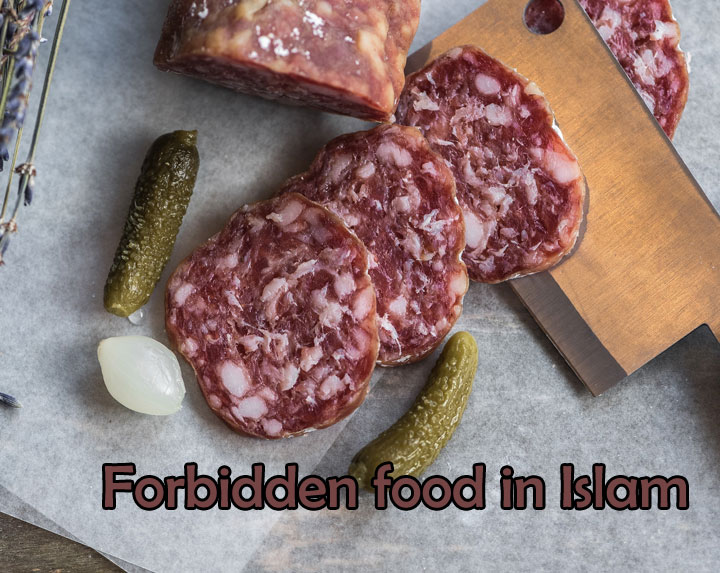 Halal is an Arabic term which means permissible or allowed. As far as food is concerned, this is the dietary norm which is stated in the Holy book Quran. Haram is the opposite of Halal and it means forbidden or unlawful. In fact, each food is regarded halal in religion Islam except those which are prohibited in Qur’an and Hadith.

Muslims eat in order to keep a good and balanced health; therefore, they are capable to contribute their role in the betterment of nation. That is why they are meant to achieve the highest nutritional quality in diet. Foods that God has forbidden to His believers to eat are as follows.

Life is the previous gift of God for both human beings and animals. If the existence of an animal is to be terminated for the survival of human beings, then it should be mandatory to sacrifice their life in the name of Allah. Thus, if in case the animal is slaughtered in the name other than Allah then Muslims do not consider that meat permissible to eat.

“Use whatever causes blood to flow, and eat the animals if the Name of Allah has been mentioned on slaughtering them...”

Quran also says that do not eat that food upon which Allah's name has not mentioned.

“And do not eat of that upon which the name of Allah has not been mentioned, for indeed, it is grave disobedience. And indeed do the devils inspire their allies [among men] to dispute with you. And if you were to obey them, indeed, you would be associators [of others with Him].”

An animal which has been died by itself during fighting or by any others means is also not permitted to eat in Islam. This law is applied on all animals except fish and that statement is proved correct with the help of Hadith.

"We set out, and we were three-hundred men carrying our journey-food on our shoulders. Then we began to eat a single date each per day." A man asked (Jabir), "O Abu Abdullah! How could a person be satisfied with a single date?" Jabir replied, "We realized the value of that one date when we could not even have that much till we reached the sea-shore, when all of a sudden we saw a huge fish cast by the sea. So, we ate of it as much as we wished for eighteen days."

The exception of fish among other animals is completely obvious from the Hadith mentioned above.

Why Dead Animals other than Fish are not allowed to eat?

Scientifically meat of the dead animal is not good for health because there is a huge difference between killing and slaughtering. In slaughtering blood is completely flow out from the body of an animal and on the other hand killing occurs in a random way and blood remains inside the body, may contain different antibodies, germs, hormones, virus, infectious organisms and when it persists there for a longer period, meat gets impure and if consumed they cause negative impact on human body.

Why Blood is forbidden for consultation in Islam

Blood is also prohibited because it is the medium of transportation inside body that is why carry toxic materials, carbon dioxide, poisons, uric acid, keratin, and also a huge amount of haemoglobin, it is not easily digestible in stomach. That is why it is not suitable for the consumption of human beings.

Reason behind the Prohibition of Meat and Fat of Pig

Pig is the only animal which is designed by God as scavenger, used to eat filth and contain different microorganisms like helminths, roundworm, pinworm, tapeworm, hookworm. Cooking temperature is also not able to eliminate the eggs of these worms from pork.

“He hath forbidden you only carrion, and blood, and swine flesh, and that which hath been immolated to (the name of) any other than Allah. But he who is driven by necessity, neither craving nor transgressing, it is no sin for him. Lo! Allah is Forgiving, Merciful.”