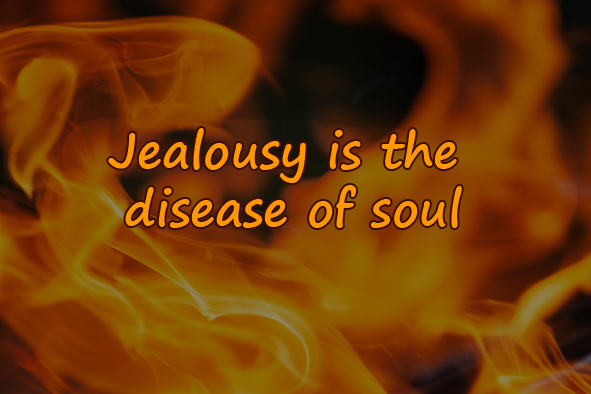 Jealousy (Hasad) is the Disease of Soul

Jealousy is not only a sin in Islam but it is considered as the most discouraged and destructive emotion in any religion. In psychologically also, it is one of the major illnesses to human health that destroys a person’s mental peace and happiness. Jealous person can cross any limit just to make people unhappy and to make people lose what Allah endowed upon them.

Jealousy is a kind of feeling that leaves the heart of a jealous person impure and empty of faith. In regard to the purity of heart, Prophet Mohammad (P.B.U.H) was asked, who are the best people? He (P.B.U.H) replied “the one with a clean heart and truthful tongue” . He (P.B.U.H) was then again asked that a truthful tongue is understandable but what does a clean heart mean? Prophet Mohammad (P.B.U.H) answered, “It is the heart of one that is pious, pure, and is free of sin, transgressions, hatred and Hasad." [Ibn Majah]

Zubair Ibn al-Awam narrated that Prophet Mohammad (P.B.U.H) said, "There has come to you the disease of the nations before you, jealousy and hatred. This is the 'shaver' (destroyer); I do not say that it shaves hair, but that it shaves (destroys) faith”. [Jamih at-Tirmidhi, 2434]

A jealous person is affected more than the person whom he is jealous of. Jealousy not only spoils the peace of mind but it also weaken the faith in Allah; because when a person gets jealous to another person he thinks that Allah has not fair enough with him, though he does not know what blessings Allah has given to His each servant and indeed! Allah does justice better than anybody can think of.

“And Allah has favored some of you over others in provision. But those who were favored would not hand over their provision to those whom their right hands possess so they would be equal to them therein. Then is it the favor of Allah they reject? [16:71]”

Jealousy is not only discouraged in Islam but the following Hadith states clearly that the jealousy factor burns all the good deeds of a person. Prophet Mohammad (P.B.U.H) said, "Beware of jealousy, for verily it destroys good deeds the way fire destroys wood." [Abu Dawood]

Jealousy can turn a good person into an evil, same as happened to Iblis. When Allah ordered angles and Iblis to prostrate Adam in the respect and honor, but Iblis directly refused the order of Allah because he was jealous of the status Allah has given to Adam. Iblis said to Allah, "Do You see this one whom You have honored above me? If You delay me until the Day of Resurrection, I will surely destroy his descendants, except for a few”. [Surah Al-Isra; 62].

Jealousy also gives birth to so many other sins, like “back backbiting (Ghibat) and accusation (Tohmat)”. If a jealous person cannot do anything to harm that person with whom he is jealous of, then he tries to talk about him at the back, usually with the intentions to spoil his image. Sometimes, the intensity of jealousy gets too much high that a person does not satisfy with backbiting, then he reaches to accusation, which is no doubt a major sin considered in Islam.

Therefore, jealousy not only destroys a victim but also harms the attacker up to a greater extent. We as a Muslim should seek help from Allah to keep us away from this dangerous illness-jealousy. To keep ourselves protected from jealousy, we should recite the following chapter of Quran,