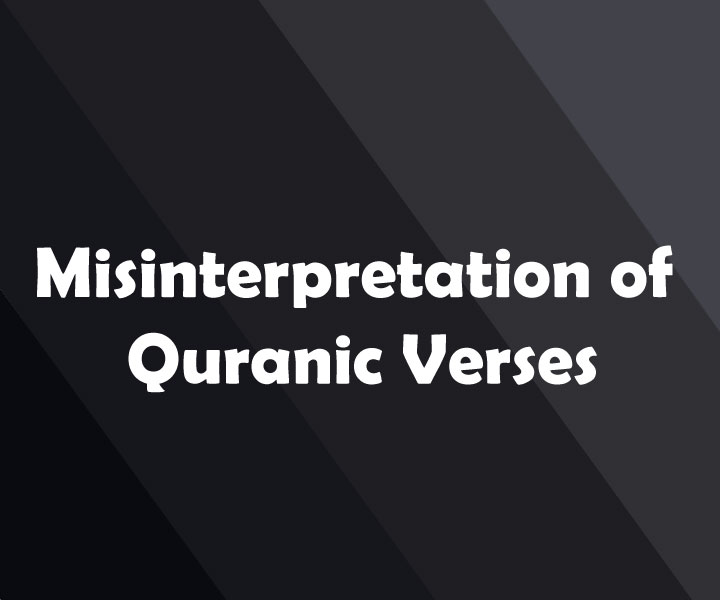 Although various scholars describe Quranic phrases regarding violence as being only in the sense of a defense mechanism to oppression; terrorist organizations have construed verses to promote their violent acts and rendered the teachings of the Quran on conflict and bloodshed a topic of intense debate.

People use Islamic verses and mold the verses as per to their own wishes; however it is the major sin. Allah says in Surah Al-Araf verse 33 that by saying something on taking the name of Allah as that statement is stated by Allah is itself the haram thing.

Say, "My Lord has only forbidden immoralities - what is apparent of them and what is concealed - and sin, and oppression without right, and that you associate with Allah that for which He has not sent down authority, and that you say about Allah that which you do not know" [7: 33].

Islam is the religion of Peace

There is no other religion that takes care of human life than Islam. Islam has prioritize human rights a lot and Islam has declared that person a true Muslim who saves even one human life.

“O you who have believed, do not consume one another's wealth unjustly but only [in lawful] business by mutual consent. And do not kill yourselves [or one another]. Indeed, Allah is to you ever Merciful” [4: 29].

What scholars say about Quranic verses and peace in Islam?

The Quran and its promotion of justice and self-defence have been testified by various scholars and writers, both Muslim also non-Muslim, to the core rejection of abuse, brutality, coercion and bigotry.

According to Fawzy Abdelmalek, "many Muslim scholars speak of Islam as a religion of peace and not of violence. They say that the non-Muslims misunderstand the Quran verses about Jihad and the conduct of war in Islam” [ISBN: 9781468534290].

Nissim Rejwan asserts that "violence and cruelty are not in the spirit of the Quran, nor are they found in the life of the Prophet, nor in the lives of saintly Muslims" [ISBN: 9780813030975.]

Charles Matthews characterizes the peace verses as saying that, "if others want peace, you can accept them as peaceful even if they are not Muslim." As an example, Matthews cites the Surah Al-Baqarah which commands believers not to transgress limits in warfare.

“Fight in the way of Allah those who fight you but do not transgress. Indeed. Allah does not like transgressors” [2: 190].

Quran scholars say that perhaps the textual meaning of this particular statement in chapter 2 of Quran, verse 190 is a defensive war just after Qurayshi-affiliated Banu Bakr tribe violated the Hudaybiyah Treaty when they threatened Banu Khaza'a'a, a Muslim-affiliated tribe. The Prophet in turn sent a letter demanding that the Quraysh either end their alliance with Banu Bakr or pay the ransom.

The Quraysh turned down both offers from Mohammad and thus broke the treaty. It is also consented that the verse relates only to those who breached the treaty.

In verse 2:191 there are two points which that create some dispute. The first is that in case of "persecution" the killing of others is permitted; the second is that conflict may remain until "religion is for Allah" but there is no longer "fitnah".