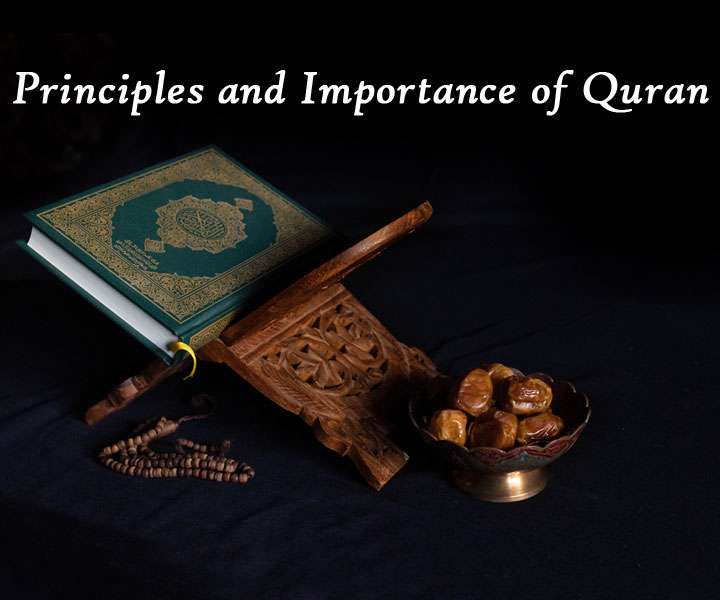 Principles and Importance of Quran

The word Quran means recitation and its verses are recited by Muslims throughout the world. The Quran was revealed to Prophet Muhammad in Ramadan, the holy month of the Islamic calendar, in the year 610CE. The Quran is Muslims' holy book, which is revealed to Prophet Muhammad in different steps over 23 years. Muslims find Quranic insights as the divine word of God, meant to correct any mistakes in past holy books, including the Old and New Testaments.

What does Quran means?

The Quran is Allah's text, which is penned in Arabic. In Arabic the expression "Quran" refers recitation. All Muslim people, regardless of the country language must recite the Quran in Arabic.

How many chapters and verses Quran consists?

The Quran comprises of one hundred and fourteen chapters consisting six thousand verses, mainly disclosed to Muhammad over a twenty-two year period. Such chapters, called surahs, are organized according to their length, ranging from longest to about twenty-two pages of Arabic text of chapter 2, to the shortest one line surah.

Muslims have several various forms of rituals of prayer, which they perform daily. Prayer is of great importance to them in their lifestyle and they use the Quran for many of their prayers. Five times a day, they do prayer rituals called Salah. At dawn, at midday, at afternoon, at sunset and at evening, they pray. These five prayers, in the order of which they are performed, are called salat al-subh, salat al-zuhr, salat al-asr, salat al-maghrib, and salat al-isha. Muslims also follow the Quran as a guide to do their worship services.

The Holy Quran is composed of Surahs, Ayahs, phrases, and letters. So, it all starts by how completely right you pronounce the letter that will end up making a correct meaning of word. It's vital to understand the letters, their sounds and the correct pronunciation of each letter and word. So, to become a pro at Quran recitation, you first need to learn the sound of each letter correctly.

The way and quality of recitation also matter. You should be humble and soft while you recite the Holy Quran.

Tajweed has some particular rules and patterns like the proper way of pronouncing the words and letters. So, we need to be well aware of all the rules which are necessary to get the proper pronunciation of the Quran. Articulation is very important for the right or correct recitation of the Quran.

When you understand what you are reading, you will be able to recite it properly. So, why rely on translators or translation when you can easily learn and understand the Quran. So, when you start learning the recitation, make an effort to understand the meaning of the words, and learn the right pronunciation.

What Allah says about Quran in the Quran?

Allah has said so many times in the book itself that Quran is the book of guidance. For example Allah says in Quran in Surah Al-Baqarah, verse 2:

“This is the Book about which there is no doubt, guidance for those conscious of Allah” [2:2]

At another place Allah has said in Surah Yunus, verse 37:

“And it was not [possible] for this Qur'an to be produced by other than Allah, but [it is] a confirmation of what was before it and a detailed explanation of the [former] Scripture, about which there is no doubt, from the Lord of the worlds” [10:37].

Allah has also warned people that if people would not follow the Quranic teaching then they themselves would be responsible for the loss. Allah says in Surah Az-Zumar, verse 41:

“Indeed, We sent down to you the Book for the people in truth. So whoever is guided - it is for [the benefit of] his soul; and whoever goes astray only goes astray to its detriment. And you are not a manager over them”. [39:41]

Thus, all of the above verses say that Quran is indeed one most important and complete piece of guidance. We should take help from Quran in our daily walk of lives so that there would be no chance of committing any wrong deed and also there would be no more confusion.