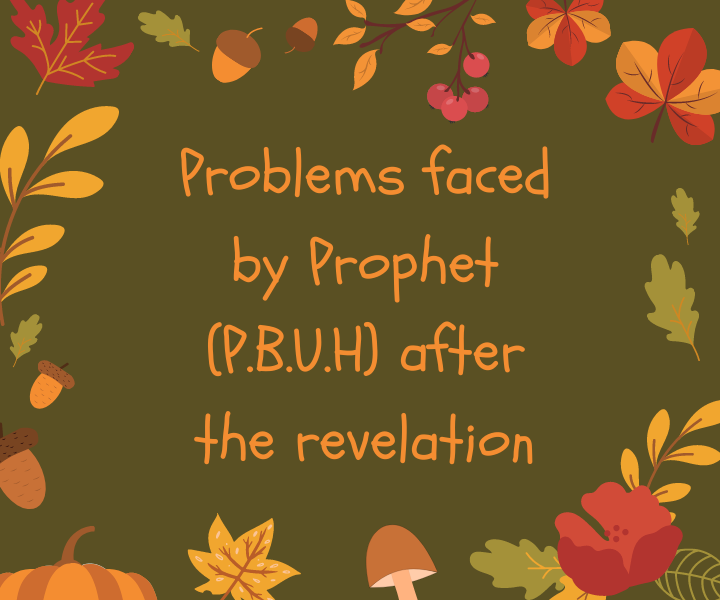 Problems faced by Prophet (P.B.U.H) after the revelation

The Holy Prophet (P.B.U.H) has begun to preach openly after receiving the divine command:

Prophet Mohammad (P.B.U.H) was out rightly rejected by the Quraysh when he addressed them from the saffa hill in Makkah. His uncle Abu Lahab cursed him (Later the Quran cursed him in Surah 111 al Lahab).He was subjected to humiliation torture and disgrace as well as thorny bushes were spread in his way. Moreover, insulting titles were hurled against him and he was physically attacked even when he was busy in prayer.

How Prophet Mohammad (P.B.U.H) was persecuted in Makkah?

Once Abu Jahal placed filth on Mohammad’s (P.B.U.H) back while he was offering prayer in Kaaba, then Hazrat Fatima (R.A) who is the Prophet's daughter removed the filth from her father’s back.

Another Chief Uqba Bin Abu Muait also placed Entrails of a camel on Prophet Mohammad’s back when he was busy in prayer. Other leaders who participated in the ugly mission of torturing the Prophet (P.B.U.H) were Umaya Bin Khalaf , Walid Bin Mughira and Shyba

He was given various insulting titles such as magician, poet, and a man possessed by spirits. He was called al abtar (man without progeny). On the death of his sons from khadija Abu lahab’s wife, umm Jamil started mocking him when there was an unusual delay in the receiving revelation. It was before the revolution of Surah 93 when she was declared that Saturn had stopped sending revolution on the Prophet Mohammad (P.B.U.H).

Prophet’s (P.B.U.H) Interaction with the Persecutors

An old makkan is reported to have been in the habit of throwing garbage on the Prophet (P.B.U.H) whenever he walked down the street she lived in. It so happened once that she did not throw filth on the profit on which he went upstairs to inquire about her well-being. Finding her ill, he attended to her till the time she had fully recovered. He was so much impressed by the kind behavior of the Prophet (P.B.U.H) that she could not resist embracing Islam.

Quraysh’s efforts to stop Prophet (P.B.U.H) from his Prophetic Mission

Leaders of the Quraysh held secret meetings several time to device and effective strategy to dissuade the Prophet’s (P.B.U.H) from preaching Islam. They collectively decided to bribe the Prophet (P.B.U.H) and send a leader with a set of temptations to him but this trick also did not work.

Finally, they decided to impose a general social boycott on Banu Hashim . Details of the boycott were written and hung on the gate of Kabah. At the end of the boycott in 619 AD, Prophet (P.B.U.H) suffered great losses. Abu Talib and Khadija (R.A) succumbed to prolonged hunger thirst. Abu talib was His protector and Khadija (R A) was the source of consolation and emotional support for him.

The Year of Sorrow

Prophet (P.B.U.H) was so saddened by their deaths that he declared 619 AD as the year of sorrow. Therefore, he found it difficult to spread Islam in Makkah so he visited Taif in 620 AD and tried to preach to Banu Thaqeef of Taif but these people proved even more hostile and the Prophet (P.B.U.H) left the town with an injured body and a heavy heart, his difficulties would not end before his migration to Medina.