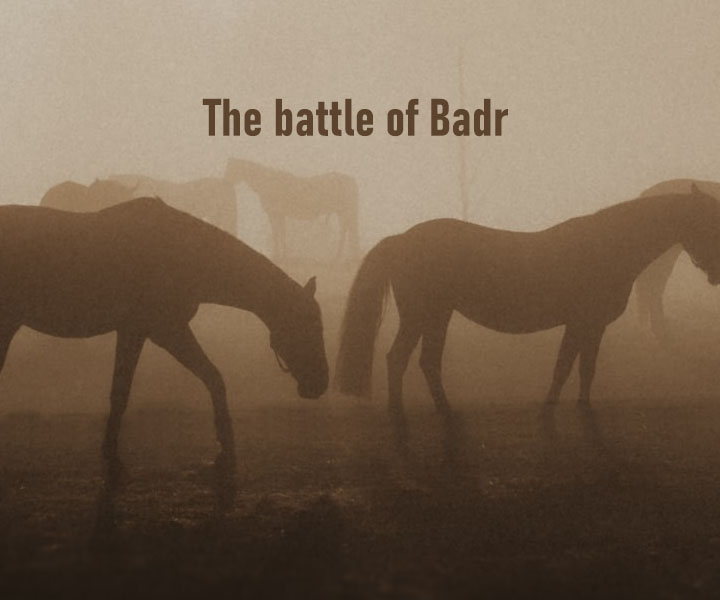 The first battle in Islam (the battle of Badr)

The battle of Badr

Battle of Badrr was fought on 17 Ramadan 2 AH, 624 AD. The immediate reason was the trade caravan of Abu Sufyan. He feared an attack by Muslims while returning from Syria because there had been skirmishes and raids started by the Makkans.

Therefore, the Prophet Mohammad (P.B.U.H) had allowed Muslims to raid the Makkan trade caravans as their route was within the range of Muslims. Then Abu sufiyan (R.A) summoned aid from Makkah.

Strength of both Armies

The Makkan chiefs quickly raised an army of 1000 and sent it towards Madina. Abu sufyan in the meantime had traveled along the coastal area and was safely arrived beyond the reach of Muslims. Abu Jahl (the most hostile Makkan chief), was bent upon attacking Medina and destroying Islam.

Moreover, when the Prophet Mohammad (P.B.U.H) heard about this, he consulted his companions and it was agreed to face the enemy out of Medina. He also gathered about 313 volunteers including 16 muhajireen while the rest were all Ansar.

Further Information about the Battle

The Holy Prophet (P.B.U.H) had appointed Abu Lubaba as his deputy in Madinah and reached the valley of Badr. The Makkans army had already reached the other end of the valley.

Muslims soon occupied the wells but the Prophet (P.B.U.H) did not forbid his enemy from taking water. Due to light rain, more water became available to the Muslims as it is stated in the Quran as,

Muslim army had a strategic location. They stood on a hard and firm sloping ground of hill, while Quraysh was standing on a flat and sandy soil. The night before the battle rain fell, so it was difficult to walk.

How the battle started?

Abu Jahl the leader of Quraysh was killed by two teenage boys of Ansar Mauz and Muaz.

With the special help of Allah and the best strategy of the Holy Prophet (P.B.U.H), Muslims won the battle and only 14 Muslims were martyred. Muslims also captured 115 camels, 14 horses and a rich store of clothes carpets and equipment of war.

This victory was the clear help of Allah as the holy Quran says:

Importance of this battle

The battle of Badr was the deciding battle. It changed the destiny of Muslims. If the Quraysh had won the battle, they would have nipped Islam in the bud. The tribe who was trying to expel Islam from Medina became more careful to launch any military action against Muslim. This victory helped Islam to spread rapidly, more and more people were converted to Islam. This victory also established the supreme authority of the Holy Prophet (P.B.U.H) in Medina.

This victory also brought a lot of riches to the Muslims, as well as their economic condition was improved. Moreover, the prisoners were also treated very nicely and the battle of Badr proved the truth of Islam; moreover, the Holy Prophet (P.B.U.H) also be proved as a true messenger of Allah.