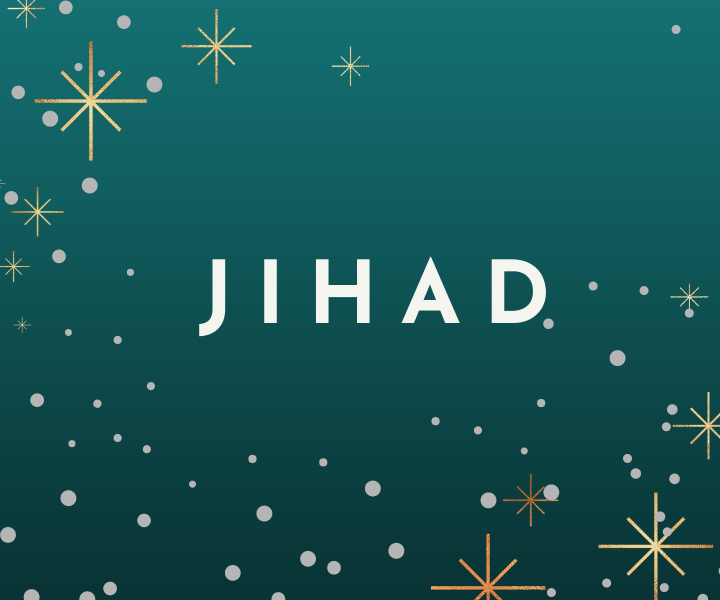 Types of Jihad in Islam

The word jihad literally means, to struggle or strive, or to work for something with determination. Jihad in Islam means striving in the way of Allah by spiritual, mental and physical capabilities i.e. through pen, tongue, hands, worship, wealth, and if inevitable, with arms. It is the duty of Muslims at both the individual and collective level, to struggle against all forms of evil, corruption, injustice, tyranny, and oppression whether this Injustice is committed against Muslims or non Muslims.

What Jihad means in Islam?

However, jihad in Islam does not include striving for individual or national power, glory, wealth, prestige or pride. The Holy Quran declares jihad as one of the integral part of a Muslim faith. As Allah says in Quran in the following verse:

“The (true) believes are those only, who believe in Allah and his messenger and afterward doubt not, but strive with their wealth and their lives for the cause of Allah. Such are the sincere.” [15:18]

It is also known as jihad by heart. A human soul is the scene of a struggle between two competing powers. Divine power attracts him towards heavenly spheres, and inspires him to act of goodness. Satanic power tempts him towards realms of darkness and shame, and invites him to acts of evil.

That spiritual jihad is the struggle against evil ideas, desires, power of lust and anger. It is to place all of them in accordance with Allah’s commands, and finally, purging all satanic ideas and influence from ones soul. This struggle is considered as the major struggle (al-jihad al-Akbar), As it is much more difficult than fighting in the battlefield, for in the struggle against the self, one has to constantly battle enemies that are hosted inside his own existence.

The Holy Prophet (P.B.U.H) said in this regard:

“The greatest jihad is to fight against the evil passions of oneself” [Risala Qushairiya].

What does Quran says about Jihad?

The Holy Quran indicates that the one who succeed in this struggle can rise above and beyond the level of angels emerges as a virtuous and blessed being, in the company of Saints, the pious and the dwellers of paradise.

On the contrary, one who fails in this struggle will descend to a level lower than that of animals. He becomes rebellious and vicious and is grouped with infields, oppressors, wrongdoers and those who are cursed. Allah says He has succeeded who purifies it (his Nafs/self), & And he has failed who instills it (with corruption). Allah says in Surah Shams, verse 9-10:

It is also known as jihad through knowledge and wisdom. Mental jihad comprises of the struggle to convey the message of God to humankind and to combat social evils, through knowledge, wisdom and dignified discourse.

As Allah says in Holy Quran:

It is the endeavor of all mental and intellectual capabilities for the sake of Allah. In other words, it refers to Dawah, which means to invite the entire creation towards goodness of Islam with wisdom and kindly exhortation.

Mental jihad does not limit itself to preaching Islam to non Muslims alone. Rather, it applies to Muslims as well, in terms of reform and renewal of their faith in Islam. It does not require a believer to be angry and engage in dispute and confrontation. It demands wisdom and gentleness. As Allah mentions in Holy Quran:

“Call to the way of your Lord with wisdom and good admonition and argue with them in a way that is best” [16:125].

It is called ‘Qital’. It relates to the use of physical force for the defense of Muslims against operation and transgression by the enemies of Allah, Islam and Muslims. According to Islamic teachings, Physical jihad is the last and ultimate option which is initiated when all diplomatic efforts have failed.

The goal of physical jihad is not to wage war to gain riches or kill people for the sake of greed or false pride. Rather, it is to promote the cause of Allah and to create justice on earth. Allah says:

“Fight in the way of Allah those who fight against you but do not transgress. Indeed, Allah does not like transgressors” [2:190].

Physical jihad becomes compulsory on Muslims when the enemy attacks a Muslim land or state. When the ruler makes the public announcement for jihad, the Muslims subjects should readily respond and volunteer to accomplish the given task.

Moreover, jihad is to promote justice. This cannot be done without strength and power. Muslims are not permitted to allow themselves or others to become or remain the passive victims of others’ injustice or aggression.