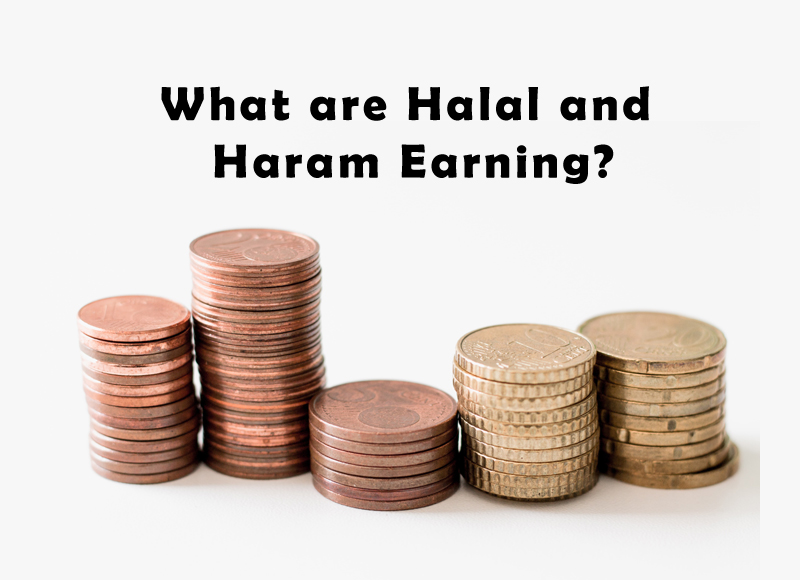 What are Halal and Haram Earning

The Importance of Halal Earning in Islam

People of today are more anxious about their career, profession and status because of their parents. When a baby is born and is grown up to a learning stage parents start to teach their kids about the worldly needs and on every instant of life. Parents teach their sons that if you would be unable to earn a good income then you will never be able to run a home and you will be left alone. Thus, every parent’s teachings are mostly similar to their children. So, the upcoming Muslim generation is completely unconscious about Islamic muamilat (business dealings) due to this practice. Some Muslims follow Islam in prayers only, some Muslim Europeans after attending the prayer they sell opium which is prohibited in Islam, so there is a hadith mentioned below which carries a message for young generation.

The Prophet (peace and blessings of Allah be to him) said:

“A time will come upon the people when they will not care as to how he gets his money whether legally or illegally.”

It is stated that people nowadays are that much apprehensive about their worldly goals that they forget the source of income.

What Does Earning in Islam Suggest?

Muslims of new generation consider wealth as one of the great bounties of Allah that is known as ‘Khair’ -meaning goodness “Prescribed for you when death approaches [any] one of you if he leaves wealth [is that he should make] a bequest for the parents and near relatives according to what is acceptable - a duty upon the righteous.”

Islam suggests that a person’s earning should be beneficial after his death for his parents. Quran also mention the attraction of this worldly life in the verse below.

“Wealth and children are [but] adornment of the worldly life. But the enduring good deeds are better to your Lord for reward and better for [one's] hope.”

Islam truly suggests accomplishing the food given by God through difficult work and endeavoring. It is expressed within the Islamic portrayals that Allah does not like an individual who supplicates for salary whereas he has stopped gaining and does not attempt for it.

“That nothing belongs to man except what he strives for, and that he will soon be shown his endeavor, and then he will be rewarded for it with the fullest reward.”

How Should we Earn Money?

Alongside the significance Islam, it also joins to picking up riches through difficult work, it places more prominent accentuation on making cash through legal (Halal) ways. This verse makes it more clear “Eat of what is lawful and pure in the earth, and do not follow in Satan’s steps.”

Based on this verse, devouring as it is what is legal (Halal) and great, and going without from illegal (Haram) things, are among the essential standards of the Islamic way of life. Numerous Islamic portrayals exhort and laud the securing of job through reasonable implies, i.e., NOT through taking, cheating, wagering, etc. Islam really underscores the significance of profitable undertakings that can increase output and produce occupations; usually the reason why winning cash through betting is Haram in this religion.

What Are the Instances of Unlawful Earning (Haram Income) in Islam?

Interpreted as usury, Riba alludes to unjustifiable, exploitative interface made in trade. The unjustifiable intrigued picked up from the reimbursement of an advance or the concurrent trade of unequal commodities is two common illustrations of usury. “There is the rule of the relationship between one's endeavors and the hoarding of riches and the significance of taking an interest within the hazard of losing one's riches as well as expanding it in any financial exchange. That's why Riba or intrigued is taboo in Islamic Law”

“The worst unlawful earning is the income a governor gains through bribery”. When few individuals bribe to pick up what they need effortlessly, the others who dodge giving bribes for any reason will confront numerous challenges to get what they are entitled to. Moreover, the bribe collectors will not fulfill what they are required to do by law unless they are bribed. So, on the off chance that bribery spreads among individuals, particularly government authorities, in a society, it'll certainly lead to an increment of debasement inside the community.

One of the incredible sins in Islam is cheating in offering things, which might be of two sorts; offering something at a better cost than its genuine value, especially when there's a deficiency of that item within the showcase, conjointly offering brief measures to buyers.

The misfortune of open believe and money related debasement are among the foremost obliterating comes about of this sin. There are too other illustrations for offering short measures, one of the foremost common of which happens in workplaces when representatives are not upright sufficient to fulfill their work commitments and duties. So, the wage they win is Haram.

Drug Dealing and the Trade of Alcoholic Drinks

Any pay one picks up through the part she/he has in creating, dispersing, or expending alcoholic refreshments conjointly medicated is considered Haram:

“They ask you about wine and gambling. Say, "In them is a great sin and [yet, some] benefit for people. But their sin is greater than their benefit…"”

Based on the verse over, the cash one gains through betting is Haram, too [IV]. That is since Islam profoundly prescribes winning the job through beneficial occupations and empowers difficult work and striving to win cash instead of getting to be affluent or losing all one’s cash overnight.

Enchantment and fortune telling are accepted to be damaging within the Islamic lessons, since according to the Quran: “Your omen is with Allah.”

So, we ought to not put believe in anybody but Him. Islam considers enchantment an act of fiend and an incredible sin which must be maintained a strategic distance from.