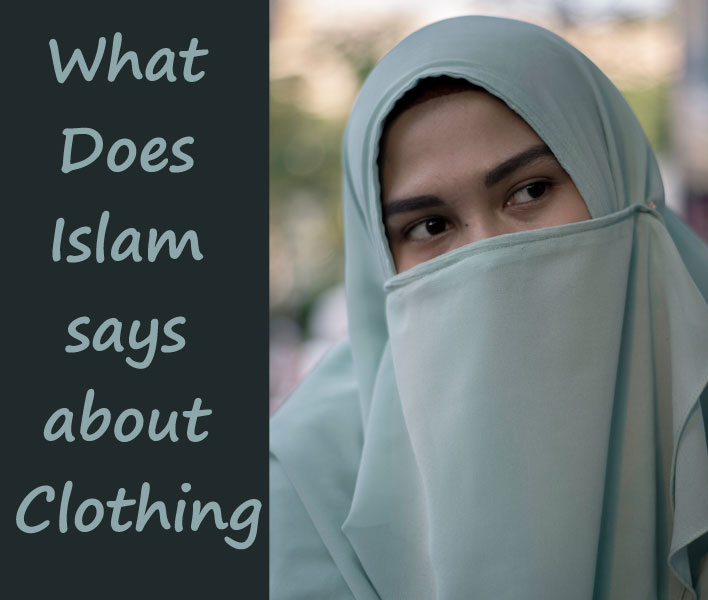 What Does Islam says about Clothing

Among the very basic needs of life, clothing is the one and it is being followed from long ago when people used to cover themselves from grass, leaves and animals’ skin etc. The world evolves so do the sense of clothing and the advancement in this domain.

Clothing isn’t only to cover ourselves but to please and reflect one’s social image towards others. Islam has also uttered the needs of clothing and emphasizes on modesty, which has been left behind by a lot of Muslims.

What Allah says about clothing?

O children of Adam, We have bestowed upon you clothing to conceal your private parts and as adornment. But the clothing of piety – that is best (Surah Al-Araf, verse 26).

The ultimate purpose of clothing is to cover and bound according to the set borders of Islam. This indication rejects all of our set standards of clothing and thus allows us to follow the prevailing norms of our society with respect to the set boundaries of Islam.

Doing as the Romans do is almost perfect and good to go with if it’s aligning with the boundaries of Islam. Whether you belong to a western society or an eastern one, you are allowed to wear the type of dresses you want. You can be extravagant too in terms of buying clothes too but it depends on your income and there is no restriction in Islam for this as long as you are being modest.

But, there are some rules need to be followed while clothing and their details are shared below:

1. Silk or Gold clothing isn’t permissible in Islam for males.

The Prophet (peace and blessings of Allaah be upon him) said: “These two [gold and silk] are forbidden for the males of my ummah and permissible for the females” [Ibn Maajah, 3640].

2. Clothes sharing a glimpse or look of Non Muslims are forbidden is Islam, like wearing Christianity sign of “Cross” because it would make you look like Non-Muslims.

It was narrated that ‘Abd-Allaah ibn ‘Amr ibn al-‘Aas said: The Messenger of Allah (P.B.U.H) saw ‘Ali wearing two garments dyed with safflower and said: “These are garments of the kuffaar; do not wear them” [Muslim, 2077].

3. Likewise, clothes which men look alike women and vice versa are also not allowed in Islam.

4. Islam is strictly against wearing see through clothes, which are very light and expose your body off or those are tight and reveal your body features.

The Prophet of Allah (P.B.U.H) said “There are two types of the dwellers of Hell whom I did not see. People having flogs like the tails of the Ox and they would be beating people with them and the women who would be dressed but appear to be naked, who would be inclined to evil and make their husbands incline towards it. Their heads would be like the humps of the bukht camel inclined to one side. They would not enter paradise and they would not smell its odour, whereas its odour would be smelt from such and such distance” [Sahih Muslim p.205 v.2].

Clothing is the pave to Paradise

Clothing is not only a basic need but a way to pave for Paradise or Hell and one should always be thankful to Allah because we are blessed enough to wear good clothes. One should follow the Sunnah of our Holy Prophet by saying Bismillah while wearing clothes and always be modest because spending too much on clothes and being extravagant won’t allow us to earn reward in this world and the world hereafter.