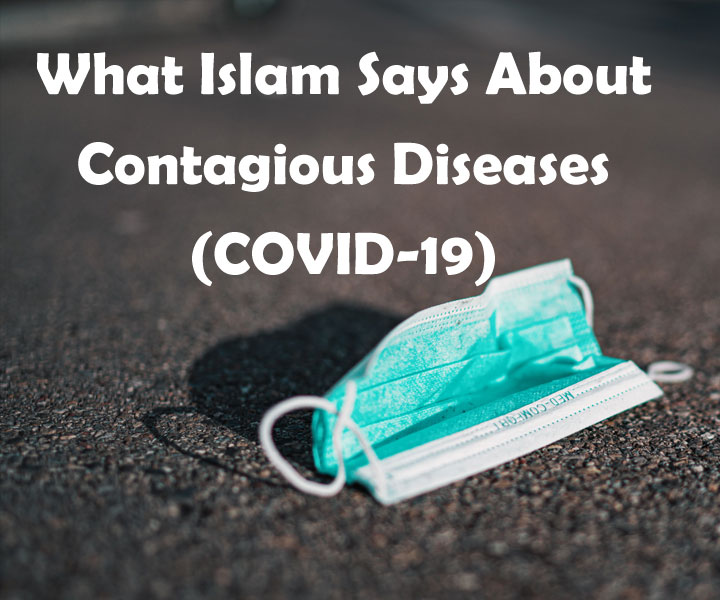 Contagious disease is one of the types of transmissible diseases, which can be transmitted through person to person by direct physical contact or by causal contact such as infectious agent could be transfer from air borne droplets of infected person to others or through objects which are contaminated by infected hands. Mostly viral diseases are contagious in nature some of them are; Coronavirus disease (COVID-19), Tuberculosis, Ebola, Flu, Measles etc. Contagious diseases are dangerous because if they start to spread it is very difficult to control and then they often result in outbreak. Islam gives clear guidelines to humanity that how to tackle with such situations through different verses and hadiths.

Avoid transmission by quarantine yourself

The basic characteristic of contagious disease is that it can easily transmit without any vector from person to person. Therefore, infected individual is the main cause behind the spread of disease because virus itself is nothing without host, if we are not providing ourselves to flourish infectious agent then one day it will eradicate completely. To stop transmission of disease is the mutual effort.

Quarantine is the only way to stop the virus from spreading because one infected person can infect or harm the whole community. That is why until or unless you are not completely cured, isolate yourself completely from social interactions. For the sake of humanity, if you separate yourself from others it is an act of kindness and intelligence.

It is previously mentioned in Hadith that:

Abu Salamah reported: The Messenger of Allah, peace and blessings be upon him, said, “There is no infection (without the decree of Allah). Do not mix the sick with the healthy.”

Adopt the habit of cleanliness it can prevent you from diseases

Islam considers cleanliness as half of faith because of its importance in our life. Germs adhere themselves on our outer skin or mucous membrane. By adopting the habit of washing or bathing, our body can get rid from those adhered infectious organisms if we are not washed them out they can get entered inside body and starts infection.

In Quran it is mentioned that God loves purity so that human beings start adopting the habits of cleanliness. Allah says:

It is mentioned in Sahih Muslim that:

“Cleanliness is half the faith (Emaan).” [Sahih Muslim]

Do not ever try to escape from disease

What is pandemic? How pandemic of infectious diseases does occur? Why travelling is forbidden when chances of pandemic is high? If someone can truly understand the answers of above questioned then he/she will never try to escape from disease.

Pandemic means the presence of disease in different geographical locations of entire world. Travelling is the only cause of pandemic because disease can emerge from a single point, if those people from that infected area do not move then how pandemic occurs. Immune system of every individual is different from one another and appearance of symptoms of disease depends on our immune system. If someone has a weaker immune system it can show symptoms rapidly as compared to the stronger ones. For example, if a small area is infected with contagious disease some people show sufferings while others not, is it right to start travel? What has happened then if those people are carriers too, they not show illness but able to transfer the infectious agent to others. That is why travelling is not allowed in such conditions because it can harm the rest of the world.

“If you hear that there is a plague in a land do not enter it; and if it (plague) visits a land while you are therein, do not go out of it.” [Saheeh Al-Bukhari, Saheeh Muslim]

Every Disease has Cure

Every disease whether it is infectious or non-infectious has cure; so, keep trying until you develop a vaccine or an antibiotic for treatment. Allah has sent down solution of every problem, we just need to search them and get benefit out of them. For example first antibiotic penicillin we get them from molds.

“And We sent down in the Qur’an such things that have healing and mercy for the believers.” [Surat al-’Israa, 17:82]

Those who are suffering from disease need special care to cope up with infection. Doctors and nurses are responsible to take care of patients and if because of the fear of infection they do not perform their duties it is not the good idea to not helping others. It is not a preventive measure but a selfish and foolish act. Allah helps and gives reward in this life and life hereafter to those who leave their homes just for the sake of humanity.

“Those who leave their homes in the cause of Allah, and are then slain or die,- On them will Allah bestow verily a goodly Provision: Truly Allah is He Who bestows the best provision. Verily He will admit them to a place with which they shall be well pleased: for Allah is All-Knowing, Most forbearing.” [The Quran, chapter 22 (Al-Hajj), verse 58–59]

In spite of having all precautionary measures against disease, still if someone gets infected and dies according to hadith they are considered as martyr.

In hadith it is mentioned with examples of infectious disease that:

Allah's Apostle said, "Five are regarded as martyrs: They are those who die because of plague, abdominal disease, drowning or a falling building etc., and the martyrs in Allah's cause.

Infected people if died they are buried with their blood on their bodies and they are neither washed nor get a funeral prayer for them because to prevent others from the infectious agent. Thus for these reasons Allah has grant them the highest rank.

It is stated in Sahih al bukhari that:

The Prophet collected every two martyrs of Uhud in one piece of cloth, and then he would ask, "Which of them had (knew) more of the Quran?" When one of them was pointed out for him, he would put that one first in the grave and say, "I will be a witness on these on the Day of Resurrection." He ordered them to be buried with their blood on their bodies and they were neither washed nor were a funeral prayer offered for them.