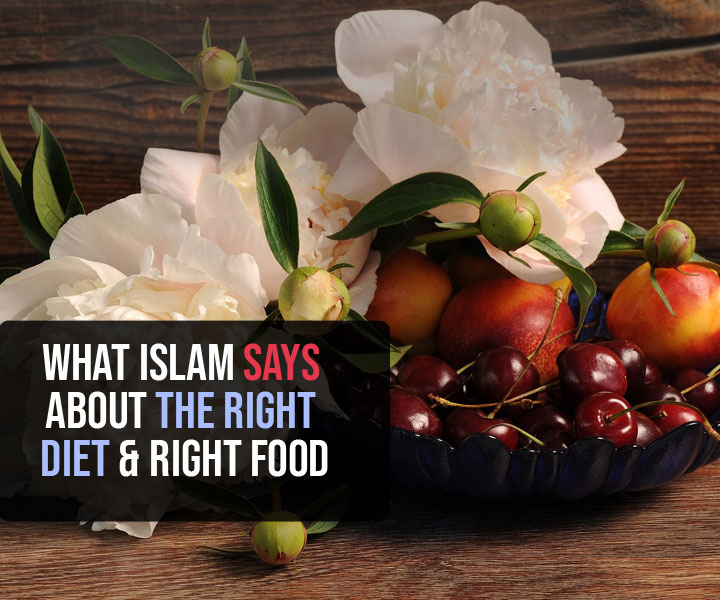 What Islam says about the Right Diet and Right Food

Working all day long but not getting healthy diet? Starting with a cup of coffee? Gearing up with snacks and coke in break? But did you know all this simply make you less productive and efficient.

Eating at the wrong time the wrong quantity of meal

So how you can increase your productivity? Eating at the wrong time with overburdened work life and few sleeping hours increase your waist and make you fall in the fat body list. Islam has given healthy diet plans with a scheduled life to help us in becoming healthy and happy.

Try to start your day early with a healthy diet and eat the least amount of food before sleep.

Focus on the Diet

Always eat in your senses, focus on your food not on TV or cellphone. Eat less and chew more as it would reduce the chances of gaining fat.

Always eat variety of food rather than eating only red, white meat or vegetables.

What Quran says about the Diet?

“And He enforced the balance. That you exceed not the bounds; but observe the balance strictly, and fall not short thereof.” [55:7-9]

“No human being has ever filled a container worse than his own stomach. The son of Adam needs no more than a few morsels of food to keep up his strength, doing so he should consider that a third of his stomach is for food, a third for drink and a third for breathing” [Ibn Maja].

Why some foods are restricted in Islam?

According to the Quran, the only specifically prohibited foods are meat of animals that die by themselves, blood, pig meat or any other food devoted to other than Allah.

Consumption of meat Muslims consume must come from a slaughtered halal animal. Milk and dairy products are halal, whatever the ingredients, cheese can be halal. There are issues that not all meat sold as halal is in fact so careful source is important.

Law of necessity in Islam

“He has only forbidden to you dead animals, blood, the flesh of swine, and that which has been dedicated to other than Allah . But whoever is forced [by necessity], neither desiring [it] nor transgressing [its limit], there is no sin upon him. Indeed, Allah is Forgiving and Merciful” [2:173].

Thus the above verse states that forbidden things can be consumed if there is some emergency, or in a necessity, or if a person is dying from hunger. Therefore, those products can be taken not intentionally but in necessity. In Shariah law this is the "law of necessity": "everything that is necessary makes the illegal permissible." Indeed Islam is the easiest religion and Allah is the most merciful.

Allah has forbidden the food which has been hunted during the pilgrimage. Allah has explained this in Quran, in Surah Al-Maidah, verse 1:

“O you who have believed, fulfill [all] contracts. Lawful for you are the animals of grazing livestock except for that which is recited to you [in this Qur'an] - hunting not being permitted while you are in the state of ihram. Indeed, Allah ordains what He intends” [5:1].

An animal which is killed using the following methods is prohibited:

• died due to falling

• killed by being smitten by horn

Allah has given the detailed explanation of prohibiting ways of slaughtering in Surah Al-Maidah, verse 3:

“Prohibited to you are dead animals, blood, the flesh of swine, and that which has been dedicated to other than Allah, and [those animals] killed by strangling or by a violent blow or by a head-long fall or by the goring of horns, and those from which a wild animal has eaten, except what you [are able to] slaughter [before its death], and those which are sacrificed on stone altars, and [prohibited is] that you seek decision through divining arrows. That is grave disobedience. This day those who disbelieve have despaired of [defeating] your religion; so fear them not, but fear Me. This day I have perfected for you your religion and completed My favor upon you and have approved for you Islam as religion. But whoever is forced by severe hunger with no inclination to sin - then indeed, Allah is Forgiving and Merciful [5:3].”

List of foods mentioned in Quran and their benefits

Game of water is permitted which Quran has mentioned in Surah Al-Maidah, verse 96:

Animals which are hunted by trained birds and animals are permitted. Allah says this in Surah Al-Maidah, verse 4:

“They ask you, [O Muhammad], what has been made lawful for them. Say, "Lawful for you are [all] good foods and [game caught by] what you have trained of hunting animals which you train as Allah has taught you. So eat of what they catch for you, and mention the name of Allah upon it, and fear Allah ." Indeed, Allah is swift in account” [5:4].

• Food of People of the Book

Jewish and Christian food is permissible for Muslims, and Islamic food is lawful for Jews and Christians alike. Allah has also mentioned this in Surah Al-Maidah, verse 5:

“This day [all] good foods have been made lawful, and the food of those who were given the Scripture is lawful for you and your food is lawful for them. And [lawful in marriage are] chaste women from among the believers and chaste women from among those who were given the Scripture before you, when you have given them their due compensation, desiring chastity, not unlawful sexual intercourse or taking [secret] lovers. And whoever denies the faith - his work has become worthless, and he, in the Hereafter, will be among the losers” [5:5].

All of the verses and Hadiths and their description say that Islam has given detailed explanation about food and has classified food into halaal and haram categories. Thus, to be the healthy person we should follow and consume the right food in the right amount.