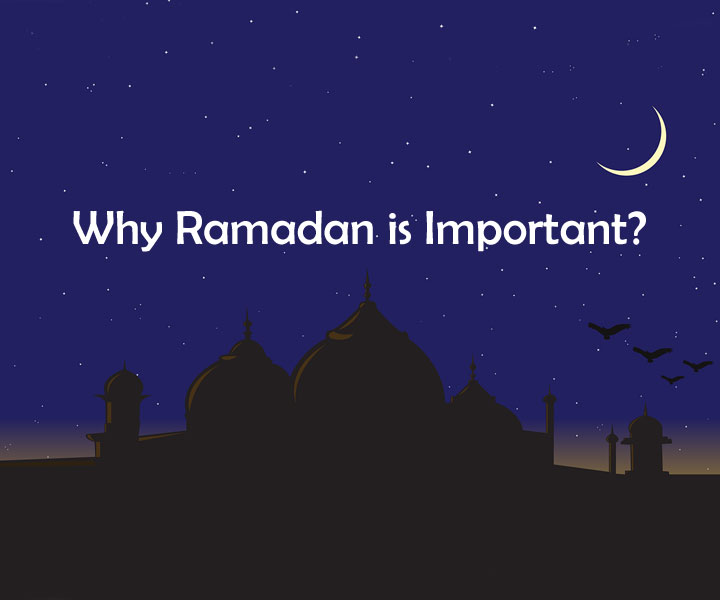 Why Ramadan is Important

Ramadan is the most significant month in the Muslim calendar (Hijri) and in this month, it is mandatory for Muslims throughout the world to fast. Fasting is one of the five pillars of Islam. Here are some key facts which show blessings of Ramadan and its importance in Islam with the reference of Quran and Hadith.

In The Month of Ramadan “The Quran” was Revealed

Quran; the book belongs to Allah, was first revealed in the Holy month of Ramadan.

“The month of Ramadan is that in which was revealed the Qur’an, guidance for the people and clear proofs of guidance and criterion. So whoever sights [the new moon of] the month, let him fast it; and whoever is ill or on a journey – then an equal number of other days. Allah intends for you ease and does not intend for you hardship and [wants] for you to complete the period and to glorify Allah for that [to] which He has guided you; and perhaps you will be grateful.” [Quran 2:185]

Taqwa is Arabic word which means to be aware of God, truth, moral fact, fear of God. It is often contained inside the Quran that those who practice Taqwa are believers who deny shirk at any cost with Allah.

“O you who believe! Fasting is prescribed for you as it was prescribed to those before you that you may learn self-restraint.” [Quran 2:183]

Laylat Al-Qadr; The Night of Decree comes in The Month of Ramadan

The Night of Decree is better than a thousand months, comes in the month of Ramadan, God beautifully describes about this night in chapter 97 of Quran, verse 1-5 and says:

Gates of Heaven are Opened; Devils are Locked Up, and Gates of Hell are Sealed in The Month Of Ramadan

Zakat is defined as 2.5% of your wealth which should be given to needy people because God has declared this amount as the right of poor people. Therefore, to pay Zakat is strongly recommended in Ramadan.

It was narrated that Ibn ‘Umar said:

“The Messenger of Allah enjoined the Zakah of Ramadan on everyone, young and old, free and slave, male and female, a Sa of dates or a Sa of barley.” [Sunan an-Nasa’i Book-23]

God Forgives our Previous Sins in Return of Fasting

“Whoever prayed at night in it (the month of Ramadan) out of sincere Faith and hoping for a reward from Allah, then all his previous sins will be forgiven.” [Sahih al-Bukhari Book-31 Hadith-1]

In another book of Hadith named Sunan an-Nasai it is found that:

“The Messenger of Allah said: ‘Whoever fasts Ramadan out of faith and in the hope of reward, he will be forgiven his previous sins.” [Sunan an-Nasa’i Book-22 Hadith-116]

Thus, these all hadiths and ayahs are concluded to show the importance of Ramadan. This month is indeed teaches patience, empathy towards poor and needy, also the month teaches dedication and considerations toward humanity. The month of Ramadan is important because it connects people with the Creator and bind people together too. There is great value of this month in the lives of Muslims.