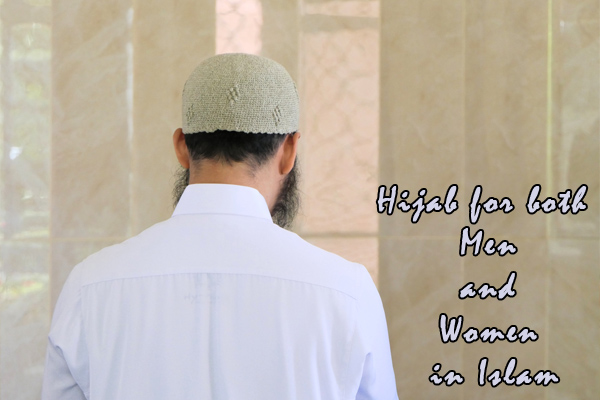 Hijab for both Men and Women in Islam

Majority people across the globe have this misconception that Islam is only concerned with the women modesty, and the concept of hijab is only applicable to Muslim women. Where Allah has commanded a Muslim woman to make a hijab, He has also ordered a Muslim man to protect his gaze. Another most common misunderstanding is that ‘hijab’ means a headscarf; however, headscarf is called as Khimar (in Arabic). The literal translation of ‘Hijab’ is a curtain or partition and it is a generalized concept in Islamic rules for both men and women.

Where Men Are Asked To Main Hijab?

Many men believe that they can force women to do hijab without understanding the actual meaning of Hijab. Hence they should understand that hijab is for them as well. Islam has advised Muslim men to guard their private parts and to lower their gaze before advising women. As Allah says in Quran in Surah Nur, verse 30:

“Tell the believing men to reduce [some] of their vision and guard their private parts. That is purer for them. Indeed, Allah is Acquainted with what they do”. [24:30]

In the next verse of same chapter Allah says:

The above two verses show that men are considered at first in regard to modesty and shame and they are advised in the first verse and then in the coming verse Allah has discussed the hijab of women.

The common culture and tradition of hijab is that women should maintain headscarf and they should cover their bodies in veils. Therefore, some Muslim countries like Saudi Arabia have made a mandatory law for women to wear headscarf and veil. Being Muslim countries, they should be aware of the complete knowledge of hijab, that if women are being restricted to follow the hijab rules, then on the other hand what about men?

Why Women Are Asked To Cover Their Body And Head?

As there is a difference between a local product and an expensive branded product. Both of these types of products have so many differences, like a branded product is always placed and presented in a glass shops where no one can touch them easily. These branded products are also have some special tags with all the details of brand so that people can easily identified that from which brand a product belongs. On the other side a local product has no special packaging and no tags which does not show the belongings of that product.

In the same way, Muslim women are also asked to follow the Muslim dress code (which must cover the body parts), so that other people can easily recognized that they are Muslims and they must be respected. Allah says in Surah Al-Ahzab, verse 59:

“O Prophet, tell your wives and your daughters and the women of the believers to bring down over themselves [part] of their outer garments. That is more suitable that they will be known and not be abused. And ever is Allah Forgiving and Merciful”. [33:59]

At one place Prophet Mohammad’s gestures have shown that how it is important for a man to keep hijab. Once, a Prophet rode with his companion Al Fadl bin Abbas. A woman described as strikingly beautiful approached the Prophet to seek his guidance on some religious matters. Al Fadl began to stare at her because of her beauty.

Noting this, the Prophet Muhammad did not scold the woman for dressing immodestly or revealing her beauty. Instead, he “reached his hand backwards, catching Al Fadl’s chin, and turned his face to the other side so that he would not gaze at her”. Thus, the Prophet Muhammad once more established that the primary burden to observe hijab rests on men.

The above verse and hadith clearly says that Hijab is the Muslim identity and Identity gives a sense of belonging to the person. This is why Allah has ordered both men and women to keep the hijab as this is an identity of a Muslim to maintain modesty.