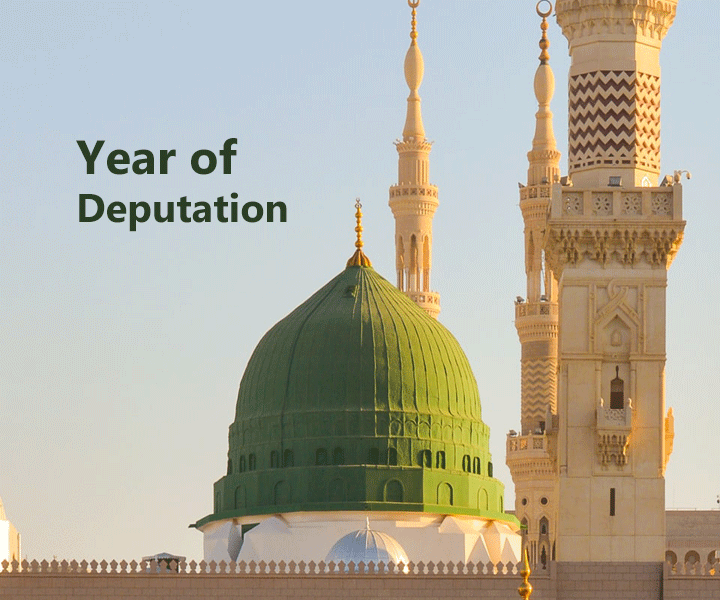 Year of Deputation in Islam

After the conquest of Meccah, Medina became the capital of Islam. Many deputations from all over Arabia poured into Madinah.

The people responded to his call in tens of thousands. Men and women from all Arabia Marched to Medina and assembled to go on Hajj with the Holy Prophet (P.B.U.H). The number exceeded one hundred thousand people.

In the afternoon of 9th Dhil-hajj, the Holy prophet rode his camel Qaswa, and gave his historical address in a gathering of more than 100,000 people. The following sermon was delivered:

“O People, lend me an attentive ear, for I know not whether after this year, I shall ever be amongst you again. Therefore listen to what I am saying to you very carefully and take these words to those who could not be present here today”.

What does Prophet Mohammad (P.B.U.H) said about respect of life and honour of people and Condemnation of usury?

“O people, just as you regard this month, this day, this city as Sacred, so regard the life and property of every Muslim as a sacred trust. Return the goods entrusted to you to their rightful owners. Hurt no one so that no one may hurt you. Remember that you will indeed meet your Lord, and that He will indeed reckon your deeds. Allah has forbidden you to take usury (interest), therefore all interest obligation shall henceforth be waived. Your capital, however, is yours to keep. You will neither inflict nor suffer any inequity. Allah has Judged that there shall be no interest and that all the interest due to Abbas ibn Abd Al-Muttalib (Prophet’s uncle) shall henceforth be waived…”.

“Beware of Satan, for the safety of your religion. He has lost all hope that he will ever be able to lead you astray in big things, so beware of following him in small things”.

What he said about Dignity of women

Prophet Mohammad (P.B.U.H) has also said about the dignity of women in his following words:

“O people, it is true that you have certain rights with regard to your women, but they also have rights over you. Remember that you have taken them as your wives only under Allah’s trust and with His permission. If they abide by your right then to them belongs the right to be fed and clothed in kindness. Do treat your women well and be kind to them for they are your partners and committed helpers. And it is your right that they do not make friends with any one of whom you do not approve, as well as never to be unchaste”.

What Prophet told about worshipping Allah alone and equality?

Prophet Mohammad (P.B.U.H) has always taught the lesson of one God and he has always tried to make people aware of the fact of oneness of God who is the only Creator of this entire universe. He has also recalled people about this in his last sermon as well:

“O people, listen to me in earnest, worship Allah, say your five daily prayers (Salah), fast during the month of Ramadan, and give your wealth in Zakat. Perform Hajj if you can afford to”.

He has further said:

“O people, no prophet or apostle will come after me and no new faith will be born. Reason well, therefore, O people, and understand words which I convey to you. I leave behind me two things, the Qu'ran and my example, the Sunnah and if you follow these you will never go astray. All those who listen to me shall pass on my words to others and those to others again; and may the last ones understand my words better than those who listen to me directly. Be my witness, O Allah, that I have conveyed your message to your people”.