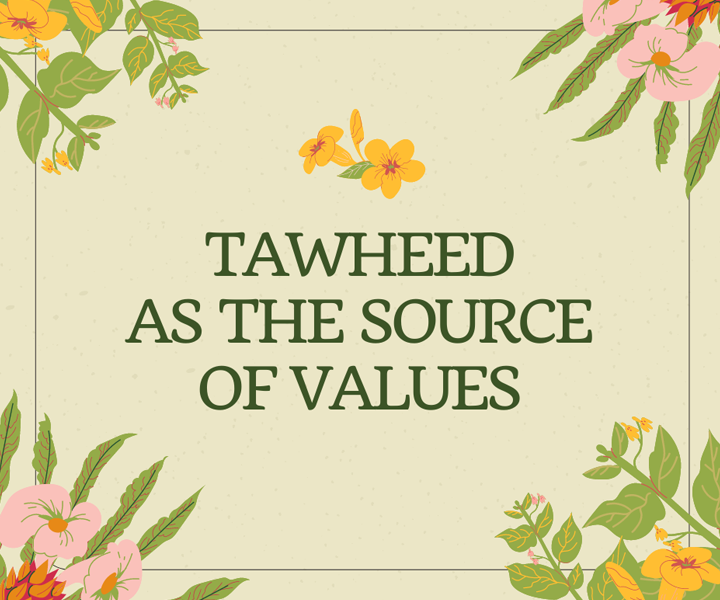 Tawheed as the Source of Values

Islam perceives God through the concept of Touheed, which literally means belief in the absolute unity and universality of Allah. Allah has said:

Touheed is the concept of the inseparable unity of the Islamic religion. Touheed is the basic pillar of Islam, and every Muslim should accept the oneness of Allah. Allah asked the angels to bow down to Adam; he had created them from clay. All are equally judged by their deeds and his mercy.

Touheed also implies the universality of God. In other words, God is the only divine authority in the universe. He is not only for Muslims, but he is God to everyone and everything. The universality side of Touheed cannot be overemphasized. He cherishes all creation, without exception.

Difference between Touheed and Monotheism

Touheed is different from monotheism. Monotheism can be interpreted as the belief in one supreme god. However, there might me other deities, objects of love and fear of secondary importance to him. Touheed is related to the oneness of Allah.

It is not allowed in Islam to associate anyone with Allah

Being convinced that someone or something has a special relationship to God, warranting divinity, like holy men, saints, sages, etc. This is not allowed in Islam. All human beings are equal in the eyes of Allah. Allah judges people on the basis of taqwa. Allah Almighty says in the Holy Quran:

Verily ! Allah will not pardon those who associate a partner with Him. Apart from him, He will pardon all others . Who ascribe partners to Allah has gone far astray. (Surah No. 4, An Nisa, Ayat No. 116)

At another place He (Allah) says in the Holy Quran:

Those who associate partners with Allah, when they will see their "partners" they will say: "Our Lord! These are `partners' whom we used to call besides 8." But they (the partners) will throw back their word at them (and say): "Indeed you are liars!" (Surah No. 16, Al Nahl, Ayat No. 86).

Allah is all alone

Islam perceives God through His ninety nine (99) attributes or names describing the most exalted qualities of excellence. Many of them indicate that He is beyond any physical structure. It is the core of Islam in all of its facets, and attestation to this Oneness (Touheed), is the axis around which all that is Islam revolves. Allah (SWT) is beyond all relationally and duality, beyond the differences of gender and of all qualities that distinguishes beings from each other in this world.