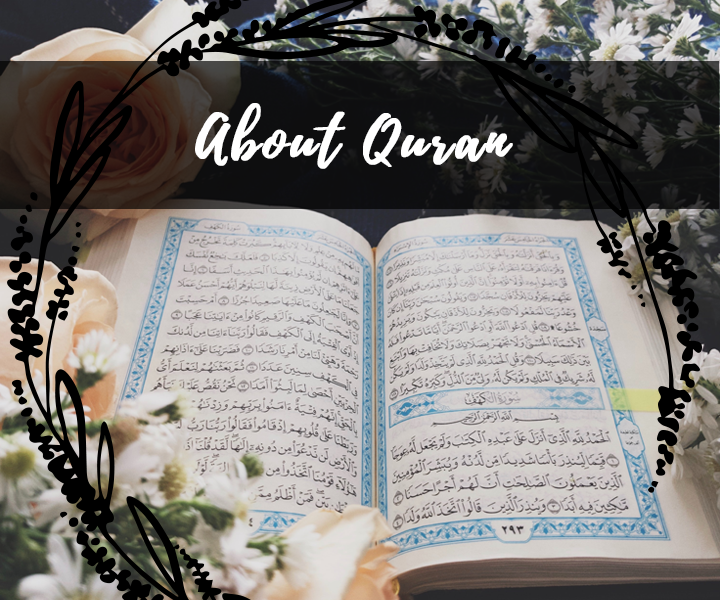 The QURAN is Islamic Holy Book. The QURAN was revealed to the Prophet Muhammad (S.A.W. W) in the month of Ramadan by Allah. Wathila Ibn al-Asqa’ (R.A.) reported that the Messenger of Allah (S.A.W.W) said;

“The Suhuf (scrolls) of Ibrahim were revealed on the first night of Ramadan, the Torah on the sixth of Ramadan, The Injeel (Gospel) on the thirteenth of Ramadan, and the Furqan (QURAN) on the twenty-fourth of Ramadan.” (Musnad Ahmad no. 16984)

In how much time Quran was revealed

It was descended gradually in about 22 years and 5 months. The word QURAN means recitation and its verses are recited by Muslims throughout the world. The QURAN is regarded by Muslims as a book of signs not science although the QURAN contains many scientific statements in various topics including embryology and the creation of earth. Abu Huraira (R.A) reported that the Prophet said;

“Having doubt in the QURAN is Kufr (disbelief)” (Surah as-Sajdah 32:2)

A person who has memorized the whole of the QURAN is called a Hafiz. Muslims believe that the QURAN is different from all other books. Umar Ibn al-Khattab (R.A.) reported that the Prophet said;

“Indeed Allah raises, through this Book, some peoples and lowers others.” (Sahih Muslim no. 996)

What Quran is comprised of?

It contains principles, doctrines and directions for every part of human activity. The QURAN is a main source of guidance for not only Muslims but all the human beings. The Prophet, peace and blessings be upon him, said,

“The best of you are those who learn the Quran and teach it.” (Sahih-al-Bukhari 4739)

A complete Book of Knowledge

The Holy QURAN is a miraculous book which can be learnt by heart. QURAN divided into 30 parts which are called “Paraas” . There are 114 chapters in the QURAN, which is written in the Arabic language and the number of verses in the QURAN is 6,666. The longest chapter of the QURAN is Surah Baqarah (286 verses) and the shortest is Surah Al-kausar (3 verses).

• The QURAN teaches that everyone is equal in the sight of God regardless of their skin colour or their background.

• The QURAN is considered the eternal miracle of Islam.

• It is the complete and best guide for living one’s life and seeking Allah’s pleasure.

• They call for the establishment of justice and fraternity though obeying Allah.

Respect for the HOLY QURAN

• Never putting it on the floor.

• Wrapping it up in a white cloth when not being used.

• Cleaning before using it.

• Touheed (The belief in one God)

• Risalah (Prophethood, Channel of communication between God and man)

“Whoever recites the QURAN secures (knowledge of) Prophethood within his ribs (bosom), though Divine Revelation has not been sent upon him. It does not befit one endowed with the QURAN that he should be indignant with those in anger, nor should he indulge in any act of ignorance with those who are ignorant, while the Speech of Allah Almighty is with him in his chest.” (Tirmidhi no. 2910)