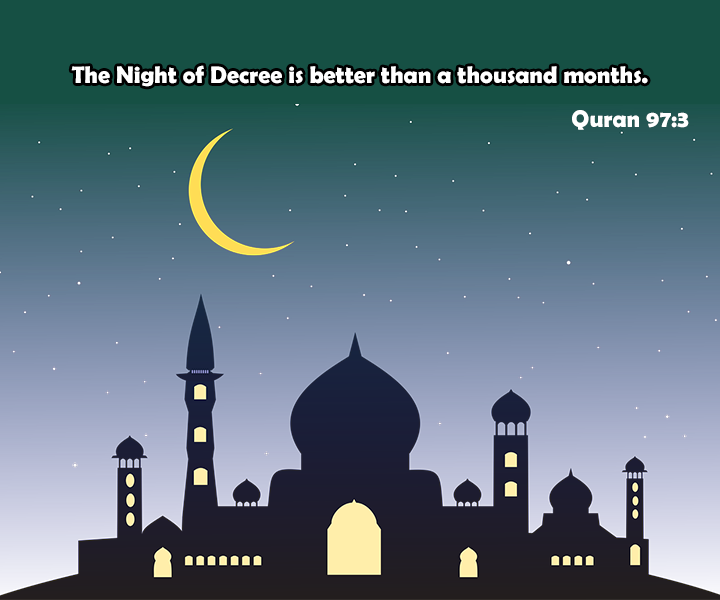 What is the greatest night?

The blessed month of Ramadan brings blessings for the Muslim Ummah. Many people get more involved in their voluntary prayers and performing religious activities to get the most out of it. Laylatul Qadr, The Night of Power equates to thousands night of Allah’s mercy, forgiveness and worship.

“The Night of Decree is better than a thousand months” [97:3]

Soon we are approaching the last ashrah of Ramadan (known as Safety from Hell), and those night have the potential of being the most consequential nights of our life. So, for the ten nights, Allah (swt) will be looking out to his creations and ways through which he can forgive us.

On which nights Laylatul Qadr could happen?

Laylatul Qadr is believed to fall on the odd nights during the last ten days and Muslims engage in extra worship to get more rewards from Allah. The exact night on which Laylatul qadr falls has not been mentioned.

“Search for Laylatul-Qadr in the odd nights of the last ten nights of Ramadan” [Sahih Bukhari].

“God has concealed this night from the ummah so that they may strive in seeking it and performing worship throughout the month in the hopes of catching it. Similarly, He concealed the hour of special acceptance on Friday so that one would increase in their supplications throughout the day, and He concealed His Greatest Name (ism al-a’dham) amongst His Divine Names and His Pleasure with acts of obedience so that people would strive for them. And He concealed an individual’s lifespan and the Hour [of the Day of Judgment] so that humanity would continuously strive in good deeds, being heedful of them” [Ibn Qudamah,al-Mughni (Dar `Alam al-Kutub), p. 453].

This means you have to devote most of your time in prayers, by ridding yourself from distraction. There are five things you need to carry with and set your mind before you approach those blessed nights.

Engaging in Worship after Maghrib

There is a misconception among some people that this night starts after Isha prayer. The night begins after Maghrib as soon as we break our fast. Some mentioned that this is an important point to note as we enter into this night. One of the best things is to avoid sins, backbiting, joking things that are not pleasing to Allah (swt).

During these nights engaging in these acts even unintentionally will result in losing Laylatul qadr even before they pray taraweeh and nawafil.

So, remember to engage in the acts of worship from Maghrib to all the way to the adhan of fajr to get greater rewards.

Another best thing you can do is to ensure that you pray your Isha and Fajir Prayer with jama’ah in all those ten days. And if praying in masjid is not possible, then it can be formed in some other way.

“How merciful is Allah and said whoever prays salatul Isha in congregation has taken their portion from Laylatul Qadr” [Muwatta Malik, Book 19, Hadith 707].

So, have the intention of praying on congregation especially during those last ten nights to gain the pleasure of Allah.

To start your Laylatul qadr productively, the best thing is to pray voluntary prayers and make sajdah. Make lots and lots of duas while you bowing in front of Allah. Engaging in reciting Quran and short duas is the best form of remembrance.

What are the best duas to recite?

Most of us have already learnt and continuously recite

“Allahumma innaka ‘afuwwun tuhibbul-‘afwa, fa’fu ‘anni (Oh allah you are the pardoner, you love to pardon, so pardon me” (Tirmidhi). We have been taught this dua form an early age.

Learning and reciting short and comprehensive duas as we make our way through the night is the most beloved act of worship. So, whatever you are doing or you are trying to think of what to do next, keep the short duas on your tongue. This will help you to stay engaged whole night.

Giving life to these nights

The most thorough way to understand the importance of Laylatul qadr is from the narration of our Prophet (P.B.U.H).

Our prophet used to tighten up his waist and give life to these nights. He would wake up his family, so they fully participate in the acts of worship. Rasulullah (P.B.U.H) said,

“Do not turn your homes into graveyards” [Sahih Muslim].

So, it is our responsibility to assign some share of prayers to our homes and constantly reads short duas as remembrance of Allah give life to our hearts and the place, we are in.

Lastly, the advice for my readers is to make sure to get away with all the distractions and pray with sincerity and wholeheartedly to Allah to forgive you and have mercy on you.