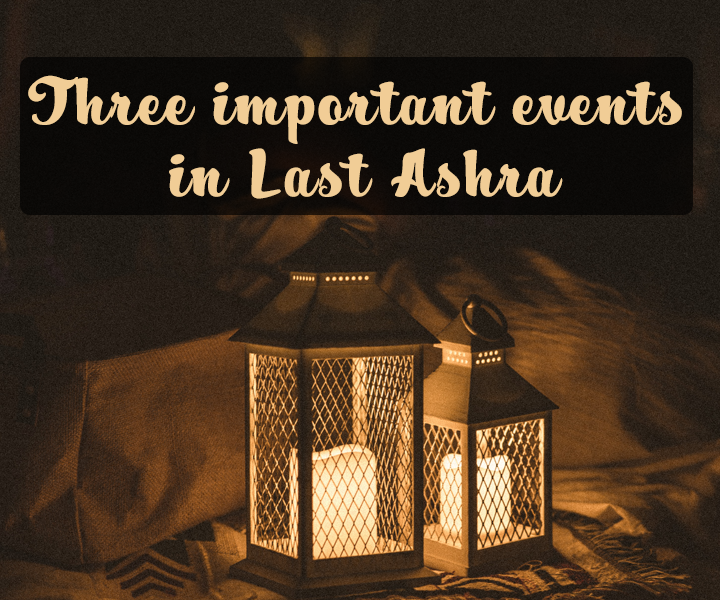 Worship and Good Deeds in the Month of Ramadan

The Holy Month of Ramadan is comprised of three ashras and each ashra consists of 10 days, but last ashra consists of either 9 or 10 days as per to the sight of moon. Ramadan is the most pious month in the whole year and Muslims are obliged to leave every materialistic thing for the sake of maximum worship and good deeds in the month of Ramadan. As it is mentioned in the following Hadith, narrated by Talha bin 'Ubaid-Ullah:

Worship and Good Deeds in the Last Ashra

Muslims should perform good deeds and worship as much as they can in the whole Ramadan but the last ashra has got some significance due to some important events which happen in the last ashra. The last nine or ten nights of last ashra are indeed the most important nights for every Muslim.

Events which happen in the Last Ashra

As mentioned in the Hadith and Quranic verses that Muslims are asked to find the night of power (Laylatul Qadar) in the last ten days of Ramadan among the odd nights (21st, 23rd, 25th, 27th, and 29th). It has not been mentioned clearly anywhere in Quran or Hadith that on which particular date the night of glory comes, but it has been guided Muslims to keep striving to find this great night among the odd nights of last nine or ten days of Ramadan.

Laylatul Qadar is the most important event which happens in the last ashra of Ramadan and it is indeed the night which is announced in Quran as the best night than thousand months. As Allah says in Quran in the following verse:

“The Night of Glory is better than a thousand months. That night the angels and the ˹holy˺ spirit descend, by the permission of their Lord, for every ˹decreed˺ matter. It is all peace until the break of dawn”. [97: 3-5]

Friday is indeed the most auspicious day for Muslims even other than Ramadan as well. But when Friday arrives in Ramadan then the significance of Friday get even more. Thus, Jummat-ul-Wida is the last Friday which arrives in the last ashra and this day is very closer to every Muslim, as we all Muslims have to say Allahafiz to the month of Ramadan till next year. Jummat-ul-Wida is the departure of Ramadan. Special supplications are offered on this day and mosques are full of Muslims than usual days.

Narrated by Hazrat Aisha (the wife of the Prophet):

“Allah's Apostle used to practice Itikaf in the middle ten days of Ramadan and once he stayed in Itikaf till the night of the twenty-first and it was the night in the morning of which he used to come out of his Itikaf. The Prophet said, "Whoever was in Itikaf with me should stay in Itikaf for the last ten days, for I was informed (of the date) of the Night (of Qadr) but I have been caused to forget it. (In the dream) I saw myself prostrating in mud and water in the morning of that night. So, look for it in the last ten nights and in the odd ones of them." It rained that night and the roof of the mosque dribbled as it was made of leaf stalks of date-palms. I saw with my own eyes the mark of mud and water on the forehead of the Prophet (in the morning of the twenty-first).” [Vol 3, Book 33, Number 244]

All three ashras of Ramadan are important and it is fard on Muslims to fast on these 30 days and worship more than usual; however among these 30 days the last ten days have greater significance because of some spiritual events happen in this month.