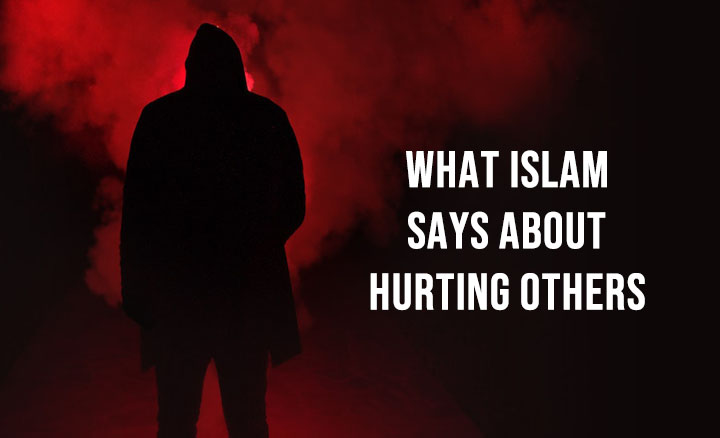 What Islam says about Hurting others

How much Islam has discouraged hurting others?

Islam has truly discouraged such acts which could hurt other, as Allah has clearly stated such act as “open sin”.

“As for those who hurt/abuse/humiliate/do unjust with believing men and women unjustifiably, they will definitely bear the guilt of slander and blatant sin [33: 58]” .

A true Islamic community entails that individuals look out for and respect for one another, support eachother during difficult times, refrain from harming others, and sustain interpersonal bonds based on [Shar'iah-approved] cheerfulness, social etiquette, and well-wishes. Islam promotes these concepts, encouraging social attitudes of tolerance, kindness, empathy, and understanding while discouraging behaviours that are detrimental to society, like unjustified strictness and harming others.

Among the goals of Islam is to live a life of goodwill and reconciliation. It is also evident that abusing someone else's rights or offending them emotionally will not help a person build good relationships with them. A foundation for decision in this respect is contained in the ayah above.

What Prophet Mohammad (P.B.U.H) has stated about not hurting others?

Narration states that the Greatest and Noblest Prophet Mohammad (P.B.U.H) asked his companions, ‘Do you know who a Muslim is?’ They replied, ‘Allah عَزَّوَجَلَّ and His messenger knows the best.

He (P.B.U.H) has stated: A Muslim is the one from whose tongue and hand, (other) Muslims remain safe.’ He has further said, ‘Do you know who a Mu`min is?’ Blessed companions replied, ‘Allah عَزَّوَجَلَّ and His messenger knows the best.’ Prophet Muhammad said, ‘A Mu`min is the one from whom believers consider their lives and wealth to be safe’ [Musnad Imam Ahmad, vol. 2, pp. 654, Hadees 6942].

Abu Huraira reported Allah's Messenger (may peace be upon him) as saying:

“Don't nurse grudge and don't bid him out for raising the price and don't nurse aversion or enmity and don't enter into a transaction when the others have entered into that transaction and be as fellow-brothers and servants of Allah. A Muslim is the brother of a Muslim. He neither oppresses him nor humiliates him nor looks down upon him. The piety is here, (and while saying so) he pointed towards his chest thrice. It is a serious evil for a Muslim that he should look down upon his brother Muslim. All things of a Muslim are inviolable for his brother in faith: his blood, his wealth and his honour/respect [Sahih Muslim]”.

Hurting people is a severe crime and a serious sin, according to the Ayah and Ahadees, who have made this judgment absolutely clear. But it is regrettable and unfortunate how this good Islamic law has been disregarded in our culture.

What should we do if we regret later on hurting others?

The Prophet Muhammad (P.B.U.H) said in this regard:

Whoever is guilty of doing some wrong against a fellow human being, whether in regard to his honour or anything else, he should obtain his forgiveness before the Day of judgment, when there will be no money to pay or decompense for it. If he has any good deeds to his credit, they will be taken away from him to the extent of his wrongdoing. And if he has no good deeds, the sins of the wronged-one will be taken and put on him. [Bukhari]

Whoever oppresses or damages Muslims will face punishment from Allah in this life as well as the hereafter, or in any of them. He has the option to repent, and Allah will show mercy to anybody who does.