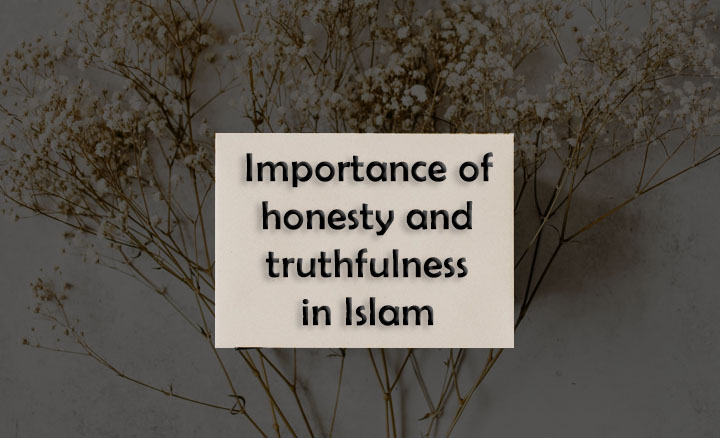 Importance of honesty and truthfulness in Islam

The faith in Islam places a high value on maintaining justice and honesty throughout all conditions, including against one's friends and family. Unfortunately, it has long been the manner of the world that falsehood is a lot easier practice to pick up than stating the truth. Nevertheless, lying only causes harm and loss. The truth, on the other hand, is among the best values an individual can have, bringing with it substantial advantages and pleasures.

There is a beautiful saying of Prophet Mohammad (P.B.U.H) which is emphasizing speaking truth. He (P.B.U.H) says:

Above everything else, Allah (SWT) likes those people who chose to communicate with the truth. A truthful individual is honoured not just in the sight of Allah (SWT), but also in the community's eyes. Truthfulness and transparency are essential characteristics of an excellent personality and even a good Muslim. Islam commands us to follow the pathway of justice, which is guided by the absolute truth and nothing else than the truth.

Allah says in the following verse of Quran that:

Speaking the truth leads directly to Paradise. Lack of integrity and trust cannot combine in Islam; a Muslim must not be dishonest and declare to have strong belief (Imaan). Fairness is a quality that allows us to gain Allah's (SWT) favor and, as a result, achieve prosperity and happiness in this world and the world hereafter. According to the Holy Quran, the honest would be honored and protected from misfortune on the Day of Judgment.

“Allah will declare, “This is the Day when ˹only˺ the faithful will benefit from their faithfulness. Theirs are Gardens under which rivers flow, to stay there for ever and ever. Allah is pleased with them and they are pleased with Him. That is the ultimate triumph [5:119]”.

How to be honest and truthful with Allah and with people

Islam encourages believers to be honest not only towards community, but also with themselves and their Lord. To be genuine to oneself promotes self-accountability, which is essential for an individual to recognise, own up to, as well as correct his faults. Becoming honest with Allah (SWT) involves worshipping Him with a true and genuine conscience and working consistently to follow His commands. To be honest to fellow companions means to express the truth as it is, to fulfill all commitments, and to participate in honest interactions free of all forms of deception and cheating.

Honesty extends to the genuineness of the behaviours and activities. If someone is honest to ownself and to Allah (SWT), he will act with honesty and integrity in all parts of life, eliminating all forms of deception. In core, dishonesty grows from an absence of integrity and a divergence from the righteousness path.

“Leave that which makes you doubt for that which does not make you doubt, for truthfulness is certainty and tranquility, whilst lying is doubt and confusion [Tirmidhi, 2520]. ”

A good human is always careful about his words

It is the responsibility of Muslims to be mindful of their words and to remain genuine, regardless of how difficult it may be. Allah (SWT) appreciates people who chose to communicate the truth over dishonesty. Lying may appear easy in the short term, but over the long term, expressing the reality is a far easier alternative that provides people with piece of mind. Therefore, people should remember oneself: embrace the truth, because Allah (SWT) would love and reward such truthful people not only in this life, but also in the Afterlife.